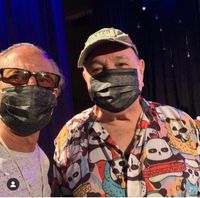 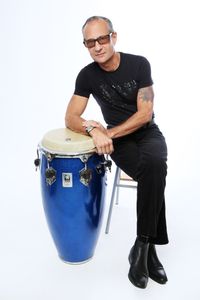 Frank Colón is a featured guest of the Viva Bossa Nova Festival 2020. This year, the festival is headlined by composer/singer, Marcos Valle and his band, which will perform supported by the Moscow Symphony Orchestra.

Frank Colón is a featured guest of the Viva Bossa Nova Festival 2020. This year, the festival is headlined by composer/singer, Marcos Valle and his band, which will perform supported by the Moscow Symphony Orchestra.

I first met Giovanni around 1980, when I went to Puerto Rico to perform shows with the Airto Moreira and Flora Purim Band. The band configuration, at that time, had Airto at the helm from the drumset, with me on multiple percussion and Flora featured on most…

They are referring to my Berimbau, which is most likely slung over my shoulder, as I always take it on board in the airplane cabin with me! The Berimbau is definitely one of my favorite instruments in the world! Historically, the instrument's use…

In Roman's own words, "It's an exceptional album, recorded during an…

In my youth as a drummer/percussionist, I had always been a "roots musician." By this, I refer to a concerted effort to learn and maintain ancient traditions of religious and folkloric drumming rituals. These were mainly imported to the Americas by the African slaves from various cultures of the old continent.

During the early 1970s, in this quest for ancient knowledge, I collected and analyzed a vast collection of African and Caribbean L.P. records and researched/studied all of the ethnomusicology…

Hey, you all, here's a fabulous surprise that was waiting for me this morning! My friend, Paul Taras Wolkowinski, is unanimously considered by the worldwide physical fitness community at large as the world's Grandmaster of Indian Club Swinging!  He recently heard an advance release from my new CD album, "Latin Lounge," and got inspired to create a workout choreography using the song "Let's Just Go....".

And, all I can say is - I love it! This sequence is both intricate and straightforward, with a…