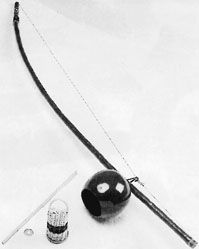 They are referring to my Berimbau, which is most likely slung over my shoulder, as I always take it on board in the airplane cabin with me! The Berimbau is definitely one of my favorite instruments in the world! Historically, the instrument's use was limited exclusively to the arena of Capoeira practitioners - Brazil's national martial art!

At present, its characteristic tones and sound effects can be found gracing many varied styles of music, from jazz to rock, to classical, to Latin, and more.

The Berimbau is held vertically in the left hand by placing the little finger under the string that attaches the gourd to the bow. The fourth and middle fingers wrap around the bow while the coin (or washer or flat stone) is held horizontally by the index finger and the thumb. The caxixí (the small basket shaker) is inserted around the middle and fourth fingers of the right hand, while the beater is held by the thumb, index, and middle fingers. The open side of the gourd is held against your abdomen, but it does not remain there permanently! You need to be able to control the Berimbau entirely in your left hand because you must play it against and away from the body. You see, it's the opening and closing of the gourd's open side against our stomach that makes the natural acoustic "wa-wa" effect, which is the beautiful sound so characteristic of a well-played berimbau.

The right-hand travels at a 45-degree angle, striking the wire below the coin's point of contact to extract the low tone. For attaining the higher notes, the beater strikes the wire above the coin. A high-pitched, raspy snare-drum-like sound is produced by whipping the wire while holding the coin lightly in contact with it. And every time the right-hand moves in on the wire, the caxixí makes its crisp, "dry-maraca" sound.

These are the traditional sounds associated with the Berimbau. In a future article, we will go over some new and avant-garde sounds and rhythms that the Berimbau can produce. The possibilities for this instrument are truly vast, so much so that I've come to respect it as being one of mankind's oldest "acoustic synthesizers"!

But.......back to the traditional execution of the Berimbau.....the most common and most often played rhythm is the one by the name of "São Bento Pequeno." It's the rhythm that everybody learns to play first and, because it's done at a moderate to medium-lively tempo, it really swings once you get the various "wa-wa" effects happening! There are, at the most, three berimbaus going at one time, and they are usually tuned at low, mid, and high pitches. The one tuned low tends to "hold the bottom" or maintain the basic rhythm going while the other players improvise a little according to the heat of the battle going on right in front of them.

To obtain the so-called "wa-wa" effect (you know, like the guitar "Wa-Wa Pedal"!), the Berimbau must always be touching your belly preceding a strike on the wire. The motion is gradual but significant in that, as soon as you strike the wire with your beater, you must move the Berimbau's gourd away from your body until you obtain the entire whole, rich tone from the gourd. This should be done for the low and high notes.

The oldest traditional rhythm is called "Angola." This rhythm is played very slowly, while the guys dueling in front do so in slow motion, each trying to outdo the other in feats of agility and strength. Again, the low-pitched Berimbau pretty much "holds the fort" by playing the basic rhythm. The other performers perform looser, playing according to the movements of the capoeiristas in the circle.

"São Bento Pequeno" is the most "famous" of the many Capoeira berimbau rhythms. Its tempo and internal swing and tone dynamic impart this simple yet manually and musically sophisticated rhythm with its contagious funk quality. As an example, please verify how a simplified variation of "São Bento Pequeno" is the rhythmic and melodic platform for composer/guitarist Baden Powell's classic, "Berimbau," composed in 1963. I, myself, use the "São Bento Pequeno" beat on Airto Moreira's song, "Paraná" on the CD, "Samba de Flora," which also features pianist Jorge Dalto and singer Flora Purim.

"Cavalleria" is the rhythm that is usually learned next. This rhythm is used exclusively to break up the function on account of the police arriving on the scene. As soon as someone plays this rhythm, everybody knows that it's time to scatter! This rhythm uses only the low note and the metallic rasp. Every time the low note is played, the note is "opened" by moving the gourd away from the body. The rasp note is produced at precisely the end of this outward trajectory, at the exact moment the Berimbau begins to return to the belly.

Each of these rhythms should be practiced over and over, many times! Your left hand must grip the instrument firmly for long periods, so you must work on strengthening your left hand and fingers. It takes, on average, two to three months to get to a point where you can actually hold the Berimbau with any sense of control. Up until this point, please practice far from glass shelves and crystal chandeliers!

Here are some more videos where I am using the Berimbau for Avant-guard improvisations.

In the first video, I perform a solo at the opening of the Moscow-Havana-New York Jazz Festival. Towards the finale of my solo, I play a rhythmic cue that brings the Bocato Big Band on stage from São Paulo, Brazil. From there, I continue as a Featured Guest of the band.

The second video is an improvisational performance as a featured artist of the Chhandayan Percussion Ensemble, whose director is Pundit Samir Chatterjee.

The third video features my own New York City band, composed of Cecilia Tenconi on sax and flutes, Buddy Williams on drums, David Ambrosio on bass, and Adam Klipple on keyboards. The song is "Another Star," by Stevie Wonder, which I arranged as a Samba-Enredo. I use the Berimbau for an intro improv, from which I'll then bring in the band by switching to a specific samba groove.

For questions or concerns about the Berimbau or any of the other percussion instruments that I perform with, please feel free to contact me!